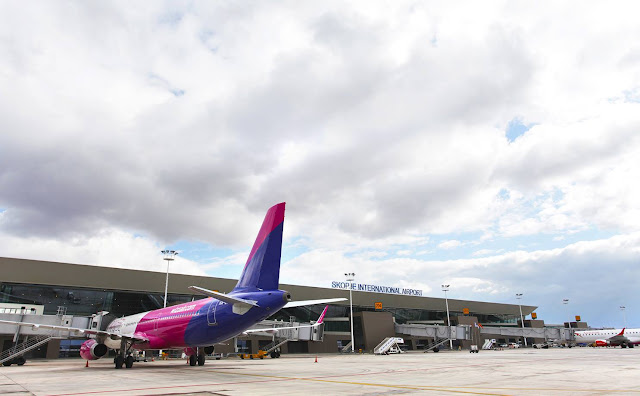 Wizz Air is further reducing its network from its base in Skopje this coming winter season, with the airline to temporarily suspend another seven routes. The carrier will not be resuming flights to Barcelona, Bremen, Hannover, Laranaca, Sandefjord, Skavsta and Vaxjo until late March 2021. It follows the budget airline’s decision to suspend flights from Skopje to Salzburg until the spring of next year. As a result, Wizz Air currently plans to maintain services from the Macedonian capital to 23 destinations during the winter, however, this is likely to change. The airline will run flights from Skopje to Basel, Baden Baden, Brussels, Bratislava, Berlin, Beauvais, Budapest, Copenhagen, Cologne, Dortmund, Eindhoven, Friedrichshafen, Gothenburg, Hamburg, Hahn, Malta, Malmo, Memmingen, Milan, Nuremberg, Rome, Turku and Venice. A number of these routes are temporarily suspended and not due to resume before the start of the 2020/2021 winter season.

Skopje has been Wizz Air’s biggest and busiest base in the former Yugoslavia. The carrier stationed its fifth aircraft in the city last year with some jets upgraded from the 180-seat A320s to the 230-seat A321s, although this winter saw its entire Skopje-based fleet uniformed to the A320s. During 2019, the airline accounted for over 60% of all passengers from the Macedonian capital. Late last year, the Macedonian government outlined plans to invest 1.7 million euros into the country’s aviation sector during this year. The majority of the funds were to be directed towards Wizz Air for the upkeep of new routes launched in 2019 based on a three-year subsidy agreement.

Following its reopening on July 1, Skopje Airport has had to deal with significantly reduced demand, not only due to the coronavirus pandemic, but also an entry ban for the majority of Macedonian nationals to most European Union member states, as well as a flight ban from certain markets. Currently, the airport is served by seven airlines, which is expected to grow to ten over the winter when Flydubai, Qatar Airways and LOT Polish Airlines are expected to restore their operations. However, Skopje’s traffic was down 16% in early September compared to late August, as Wizz Air’s temporary route network suspensions began to impact on the airport’s performance.