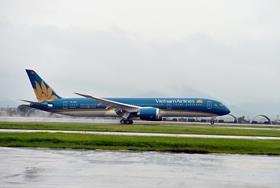 Vietnam Airlines’ domestic services are largely suspended, for two weeks until 15 April, except for five routes out of Hanoi and Ho Chi Minh City. This comes after the government issued a directive on 27 March detailing measures to control the spread of coronavirus, which includes curtailing the number of flight operations.

Bangkok Airways is suspending all international flights from 29 March till 24 October, and 10 domestic routes from April to October. It continues to operate seven domestic routes, either with reduced frequencies or by deploying the smaller ATR 72 turboprops.

To mitigate the impact of lower revenue, the airline is reducing salaries by up to 50% and will relocate outstation staff to its Bangkok headquarters. It has also begun negotiations with various parties to reduce flight operations cost, such ground handling charges, parking fee, air navigation fees, and fuel excise tax. It also plans to remove aircraft from service.

It plans to negotiate with lessors, request additional credit lines from financial institutions while seeking adjustment to debt repayment.

Thai low-cost operator Nok Air has halted the three international routes it operates, to Hiroshima, Ho Chi Minh City, and Yangon, but will maintain domestic flights according to demand.

Meanwhile, Malaysia Airlines will reinstate select flights to Auckland, Melbourne, Sydney and Perth, as well as Jakarta and Guangzhou between 1 April and 18 May. The airline reduced flights significantly in mid-March due a partial lockdown in the country. Group chief executive Izham Ismail attributes this to customers “requesting for available flights mostly between Kuala Lumpur to Australia and New Zealand, as well as Kuala Lumpur onward to London”.

Royal Brunei Airlines has been operating on a limited basis since 23 March, maintain twice-weekly operations to Hong Kong, Manila, Melbourne and Singapore until 30 April. It says that these flights are operated to “retain vital connectivity” for services and supplies, and for essential passenger travel.